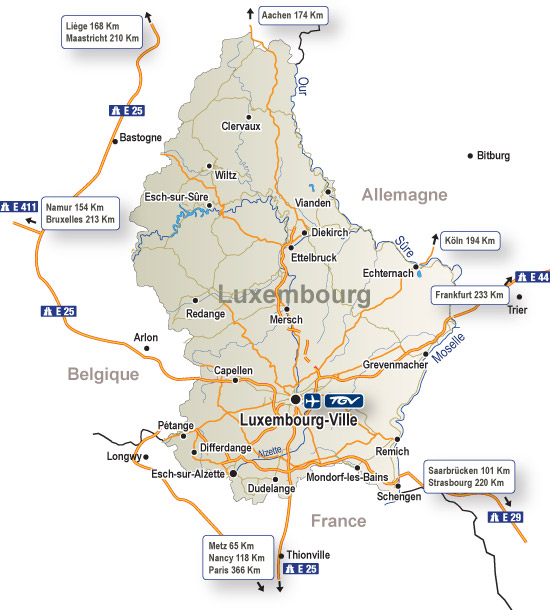 The Grand Duchy of Luxembourg (Luxembourgish: Groussherzogtum Lëtzebuerg), is a landlocked country in Western Europe, bordered by Belgium, France, and Germany. Luxembourg has a population of about 625.000 people in an area of approximately 2,586 square kilometres (999 sq mi). It is a parliamentary democracy under a constitutional monarchy, ruled by the Grand Duke. It is the world’s only remaining sovereign Grand Duchy.  Founded in 963, Luxembourg became a Grand Duchy in 1815 at the congress of Vienna. The country has a highly developed economy, with the second-highest gross domestic product per capita in the world, according to the International Monetary Fund (IMF).

The national language is Luxembourgish (Lëtzebuergesch), but Luxembourg is a trilingual country characterised by the use and recognition of French, German and  Luxembourgish.

Luxembourg is a founding member of the major multilateral  organisations such as the United Nations, NATO, OECD, the European Union, reflecting its political consensus in favour of economic, political, and military integration. Luxembourg City, the country’s capital and largest city, is the seat of several EU institutions and agencies.

Cookies
Our sites may use cookies or other technologies that may collect or store Personal Data. Cookies are text files stored and used to record Personal and Non-Personal Data about You browsing the Sites. Cookies can be permanent or temporary. We use cookies to

You can also configure Your browser to consistently deny cookies (including cookies used for audience measurement purposes). However, in this case, some features of the sites may not work properly.